You know who's terrific? You guys!
Thank you for welcoming me back to Blogland with such open arms, it was so great hearing from you, and I enjoyed writing back to each of you, good times! I'd been so worried about what to say, and you all were just as friendly and awesome as ever. So cool.

Ok, so! How do we feel about some more embroidery? 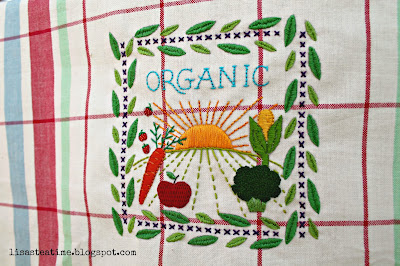 Back on New Years Eve, a few of my stitchy friends and I were chatting online about our big NYE plans and the lack thereof. Heh! I had a stomach flu at the time which meant, I had no plans. Zip, zero, nada. We decided to stitch in the new year together/apart. 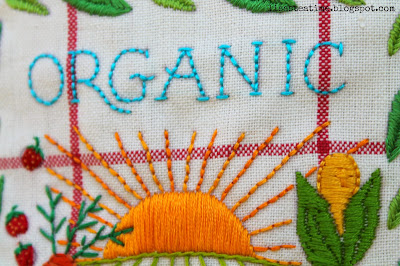 I had nothing going at the time, having just finished the Christmas making season, so I got to pick something just for the heck of it, how novel! I had this Stitcher's Revolution transfer pattern in my stash forever, as well as some of this cotton toweling 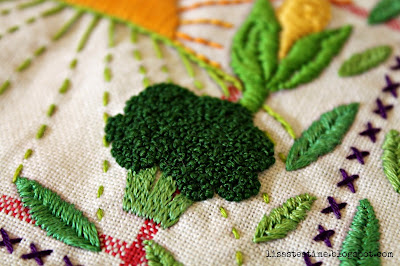 Since I was making this for me and I wasn't rushed, I decided to challenge myself to slow down, get a little creative, and do the entire pattern in fill stitches. Like my broccoli? It's all French Knots! It kind of cracks me up, it seriously looks like real broccoli. I did the stems in split stitch 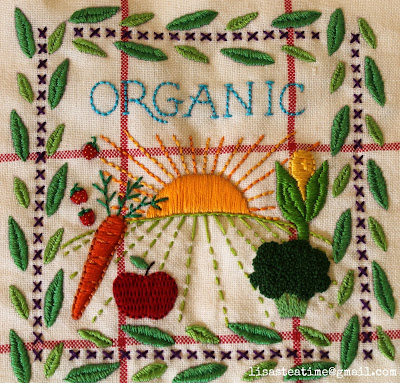 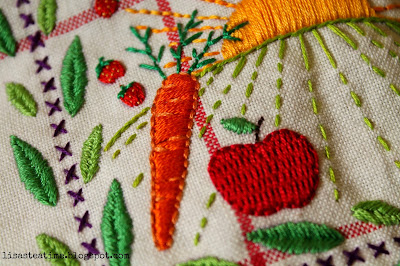 The carrot the satin stitch treatment, and for the apple I experimented with the long-short stitch. I'm still not great at that one, but I really liked playing around with it. The little strawberries up there, I think they're originally intended to be peas, or maybe grapes, but I felt like this embroidery already had a lot of green going on with the leaf border, so I made them into teeny, tiny strawberries. 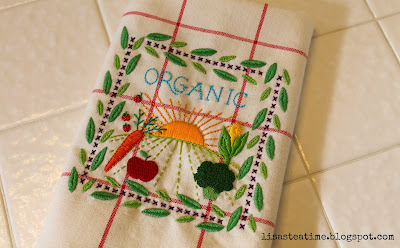 I'm very pleased with the final pattern, and really glad I stuck all that fill stitching out. I'll be honest about something though... ain't nobody going to be wiping their grimy mitts on this towel, it's for looks only since it's got about 20 hours if embroidery time into it :) Silly, I know!

I've only got one other thing on the hoop right now, but I'm thinking of starting something else (isn't that the way?), a Follow The White Bunny pattern that I've wanted to stitch forever, we'll see!

Hope you're all having a great week so far, it's almost hump day!
oxo,
Lisa

p.s. OH! I almost forgot something I wanted to ask you! Who's watching Downton Abbey this season?? Isn't it great? How could something be so wonderful & gut wrenching at the same time, gah!
Posted by Lisa at Tuesday, February 05, 2013

It's lovely. The brocolli really does look like brocolli! So many french knots...

I also struggled with long and short stitch until I discovered the stitches should not be regular sizes, it's actually more like longer and shorter stitch so it looks less like rows and is a good way of gently blending colours.

I have to say you are an excellent needle artist! I am blown away by all those French Knots that made up the broccoli, and yes, it looks real! I love all your stitches, I even love the apple, so don't sell yourself short on that one! :)

Oh, I caught the Downton Abbey fever late, so I missed season 1, and half of season 2, but I am watching now. I adore it. I can't believe someone hasn't come up with a Downton Abbey SAL or something. I think that would be loads of fun.

So glad to see you blogging again, you were certainly missed. :)

Oh, this is just wonderful! I love it. Stitchy perfection. ♥

Downton Abbey is toying with my emotions! But I love it. :)

I am now hungry for some broccoli! This is great! Perhaps you should frame it now for your kitchen?

I haven't caught Downton Fever yet. I keep being told I should though.

This turned out so great! I have a hard time imagining it w/o fill stitches (but that's a problem I have). I think your long and short look great and I have a confession about the broccoli: I want to eat it AND I want to rub those nubby French knots on my cheek ever so gently. So... better hide it when I come over. :)

I haven't embroidered in a long time...finally picked it up again..and noticed that my stitching needs work... but I'm giving it a good whirl.. Love your stitching you did it just looks so pretty...Happy weekend with love Janice

I love this so much! It's good to stitch something just for the heck of it. I think it shows in your piece. I featured your broccoli detail on the &Stitches FB page yesterday and stitchy folk absolutely love it! Can't wait for your version of my pattern (don't know which one it is though!) :)

Broccoli in French knots are awesome!

Who's blog is this anyway?

Lisa
Lodi, California, United States
I'm a tea fueled, Vespa riding, embroidery junkie! Welcome to my little speck of the world! This is where I share what I'm up to and blather about the stitchy~quilty~crafty things I like to make. Kick back and enjoy your time here. Oh, and please feel free to jump in and comment, I love hearing from you! I was featured on... 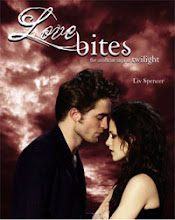 Come stitch along with us!